The History of the Laptop: An Essential Guide to Laptops, Notebooks, and Chromebooks 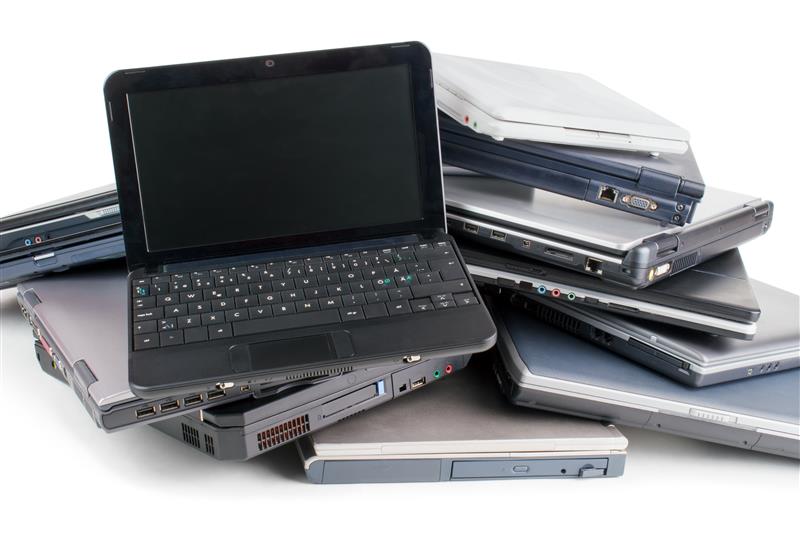 For 1:1 education technology initiatives, it’s important to understand your options when it comes to mobile devices. Chromebooks are a popular choice for many education technology programs. With so many industry terms flying around and sometimes used interchangeably, it can cause your head to spin making it difficult to choose the right device for your ed tech program. We’re breaking down the foundational and influential history of the laptop, and ins and outs of each type of device.

What is a Laptop?

In the simplest terms, a laptop is a portable computer. It was created as the compact and portable version of a desktop computer.

The History of the Laptop

All roads lead to the laptop. Arriving on the scene in 1981, the Osborne 1, of Osborne Computer Corp., is widely regarded as the first laptop. It’s a far cry from the sleek and light laptops we see today. Weighing in at a hefty 24 pounds with a price tag north of $1,500, the Osborne 1 featured a 5” screen, two floppy drives, and bundled software. Introduced as an ideal office solution for business execs on the move, this model never saw any type of real success.

Fortunately, though, Osborne Computer Corp. was not the only computer company with an interest in the advent of the portable computer. Epson, Microsoft partnered with Radioshack, and IBM all released laptop computers by the mid 1980s. Microsoft was the first to feature a laptop with an LCD display.

Various computer powerhouses continued to introduce new laptops and integrated technologies in the late 1980s into the 1990s. Most notably:

In 2008, laptops eclipsed desktops in sales for the first time. This trend has continued since, with laptops consistently outselling desktop models yearly. Today, laptops are still very popular despite decreased net sales for personal computers. This decrease is due in part to the increased popularity of smartphones. Although net sales have decreased since 2012, laptops are on the uptrend, with laptop sales increasing since 2016. In 2019, 166 million laptops were sold worldwide.

What is a Notebook?

A notebook computer, which is typically a smaller, slimmer, and lighter laptop, was first introduced in the late 1980s by NEC. It was a similar in size to a laptop but weighed in at mere five pounds. By the early 1990s, Compaq and Apple had both released versions of the notebook as well.

Generally, notebooks are less expensive than laptops, ranging in price from $150 to $400.

A type of notebook, the ultrabook, was first introduced in 2011 as Intel’s answer to Apple’s thin and light MacBook. They are a high-end notebook that use low-power Intel Core processors, solid-state drives, and unibody chassis to create an ultra-light computer without sacrificing battery life.

What is a Chromebook?

First introduced in June 2011, a Chromebook is a type of laptop that uses the Linux-based Chrome OS as its operating system. Chromebooks are specifically designed to use the Google Chrome browser and most activities occur online via Chrome. This includes word processing, creating spreadsheets and slideshows, note taking, etc. These docs are automatically saved to cloud storage via Google Drive.

One of the biggest differences between a laptop and Chromebook is security. There is no need to purchase virus protection because it is built into the Chrome OS. This built-in protection is regularly updated via the Chrome OS’ auto updates. This makes Chromebooks nearly impervious to viruses and malware.

Closely related to this is the Auto Update Expiration (UAE, formerly known as EOL). This is the date that the Chrome OS will no longer support regular auto updates for software and security patches, as well as technical support. The Chromebook will still be functional, but it would be risky to use the device past this date.

Another difference between a laptop or notebook versus a Chromebook was storage. Chromebooks rely on cloud-based storage for most applications and data, as opposed to internal storage on the machine itself. However, cloud storage is common for any laptop today, whether it’s powered by Microsoft (OneDrive) or Apple (iCloud) operating systems. Various cloud storage platforms, like Dropbox and Google Drive, can also be used for older laptops where cloud storage is not as common.

Chromebooks are a popular choice for ed tech program because they are affordable, fast, secure, require little maintenance, and collaborative. Whatever device you may be considering for your school, AGParts Education can help. Our dedicated team of Account Executives have the knowledge and expertise to help you build the right education technology program for your school. Contact us today for more information on devices for 1:1 education technology initiatives.