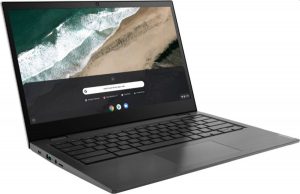 When Lenovo launched three new Intel-powered Chromebooks recently, the company didn’t mention that there would be a fourth model powered by an AMD processor.  But it looks like the company went ahead and released one anyway, because a new Lenovo Chromebook S345-14 with an AMD A6-9220 processor and a 14 inch touchscreen display, 4GB of RAM, and 32GB of storage for $329.

That’s not a bad price for a laptop with an aluminum body, a full HD touchscreen display, and a 180-degree hinge… although AMD’s A6-9220 processor with Radeon R5 graphics isn’t exactly a speed demon.As noted by About Chromebooks, it looks like Lenovo may also offer cheaper models with an AMD A4-9120 processor and Radeon R4 graphics.

The information for this post was taken from an article by Brad Linder in liliputing, follow this link for the complete article and more details.

Here are some additional sources to get different viewpoints on this new model: CHROME UNBOXED, and About Chromebooks.