Chromebook vs Laptop for Students: A Side-by-Side Comparison 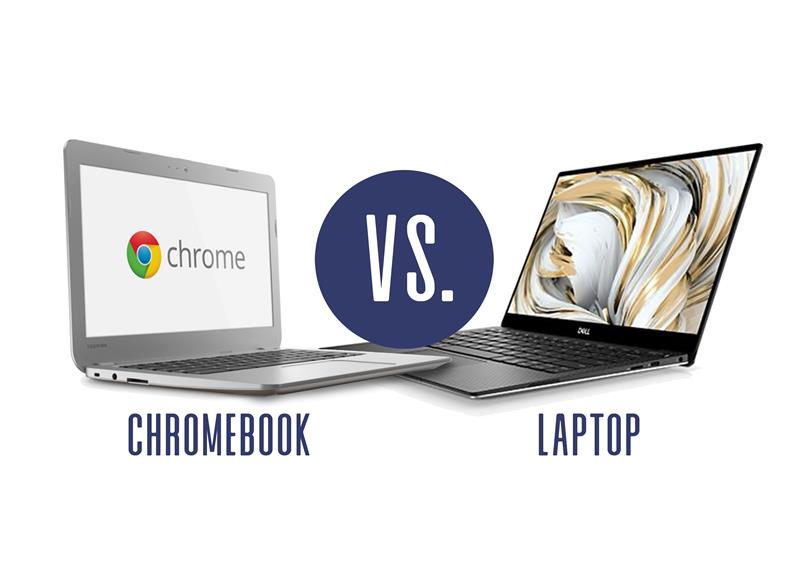 What is the best type of device for your district? Chromebooks are stripped down laptops with a straightforward user experience. Windows laptops and MacBooks are more complicated devices but have their own benefits. Today, we’ll discuss Chromebook vs laptop for students, and what the best option is for your district.

What is a Chromebook? What is a Laptop?

In the simplest terms, a laptop is a portable computer, created as the compact and portable version of desktop computer. Notebooks are a thinner version and lighter version of a laptop, and Ultrabooks are thinner and lighter than notebooks typically with loads of features. For the purposes of this article, a laptop refers to any non-Chromebook portable computer, specifically a Windows laptop or MacBook.

Chromebook vs Laptop Side by Side

Each operating system carries its own strengths and weakness, and much is subjective to the user. Chrome OS and macOS have the most straightforward interfaces, making them easier to use for students, while Windows is most complex. MacOS is most intuitive when it comes to multitasking and having multiple applications and windows open. Chrome OS is likely the least multitasking friendly. Ultimately, this all comes down to the students’ needs.

This is one of the biggest differences when comparing a Chromebook vs laptop. Chromebooks have virtually no software. Most applications run in Google Chrome. Applications are downloaded from the Google Play Store, and no third-party software can be installed on a Chromebook. This makes them boot very quickly.

No software makes Chromebooks extremely easy to deploy and manage. Setup on a Chromebook is generally simpler than its counterparts. Updates are generally easier to manage, and there is no need for your technology department to install software on hundreds, or thousands, of devices.

When comparing devices, you may be shocked to see how little local storage a Chromebook needs, especially when compared to its Windows laptop and MacBook counterpart. Chromebooks can run on as little as 16GB of local storage. This is largely due to no software. Additionally, Chromebooks rely on Google Drive as their cloud-based storage system.

Although a Windows laptop and MacBook both have their own cloud-based storage, they still boast a large amount of local storage. It is not uncommon to find a laptop with 128GB to 256GB to as much as 1TB. There really is no upper limit in terms of storage

Another big difference in Chromebooks vs laptops—virus protection. Google designed Chromebooks with security in mind. For Chromebooks, there is very little to attack, which makes them protected and secure devices. Google delivers updates and vital security patches automatically until the Chromebook’s AUE. These updates require little to no maintenance or oversight making the process easy peasy.

Windows laptops, and MacBooks, are much more complicated devices. MacBooks are generally considered secure devices as macOS has many protections in place against viruses and malware.

On the other hand, Windows laptops are most vulnerable to viruses and malware. They own the market share, making them a more attractive target to malware makers. And while Windows does come with Windows Defender, these laptops generally require a third-party antivirus software in addition. This translates to more maintenance and oversight when using Windows laptops.

In this case, save the headache—Chromebooks are the easiest and bring most peace of mind in knowing your students and devices are protected.

Expect Chromebooks to require the least amount of maintenance, largely due to no software and integrated virus protection with automatic updates from Google. Generally, Chromebooks are also easy to repair in house. This is another attraction—repair can be as simple as ordering a part and watching a tutorial. We have a complete library of 175+ Chromebook repair tutorials for a variety of models.

Expect a Windows laptop to require the most maintenance in managing software updates and any other issues that may arise.

While Chromebooks and some Windows laptops come in at comparable price points, MacBooks are the most expensive device. Unless your district plans to buy a refurbished model, expect to pay an upwards of $1,000 per device.

Chromebooks and Windows laptops for education are affordable and you can generally find models between $200-$400.

Chromebook vs Laptop: The Winner?

Chromebooks make an extremely compelling case for any district. Low price, low maintenance, and easy to use, Chromebooks have everything a student would need for their work. Ultimately though, the winning device all comes down to the needs of your district and students.

When it comes to your 1:1 Chromebooks, AGParts Education has your back. From Chromebook parts to buyback, we support 6,000+ US school districts. Contact us today to see how we can help your school district today.