Benefits of Chromebooks in the Classroom 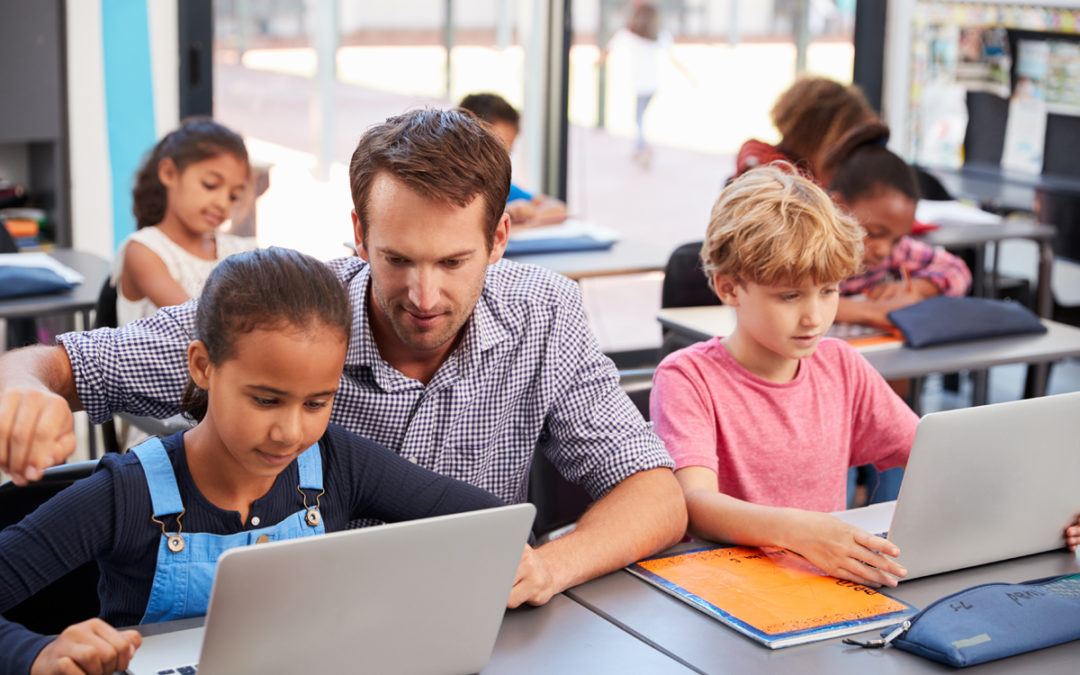 Is your school considering implementing a 1:1 Chromebook program? If so, you may be curious about Chromebooks and how they stack up to their competition. Today, we’ll look at that and more, including the benefits of Chromebooks in the classroom.

Before we explore the benefits that Chromebooks can bring to your school, let’s look back at the history of 1:1 computing.

One-to-one computing is exactly what it sounds like—it is one computer for every student. Technology was first introduced in education in the 1920s when radio made lessons available to students within listening range. Since then, it’s been milestone after milestone as technology continues to be widespread across all schooling levels.

In the late 1990s, 1:1 programs were first introduced. In those early years, primary schools favored Apple devices while secondary schools favored Windows devices. Type of device is contingent upon many factors: age of students, budget, and benefits.

It’s estimated that 40% of US schools have a 1:1 program, with another 30% of schools having at least one device for five or less students. Despite the popularity of 1:1 programs, one statistic remains particularly troublesome: teachers report that 12% of students don’t have access to the internet or computer at home. In a world where technology dominates, 1:1 programs are a lifeline for these learners to prepare them for the future.

There’s no denying the Chromebook’s universal popularity by schools and consumers alike. A streamlined, internet-heavy laptop with a price tag that can’t be beat, 30 million students and educators used Chromebooks in 2019 alone. After 2020, their popularity has only grown. The Chromebook was first introduced in the classroom in 2012 as Google began to pilot the device in schools nationwide. By 2014, Chromebook surpassed iPads in sales.

Benefits of Using Devices in the Classroom

With 12% of students across the country with no access to the internet or a computer at home, devices in the classroom provide access to students that would otherwise not have it.

Using video or an interactive activity can make a boring subject more palatable to students and engage disinterested learners.

Technology-based learning incorporates different learning styles, which allow for students to tackle difficult subject according to their needs.

Prepares Students for the Future

College and career readiness is paramount for a student, and use of technology in the classroom will no doubt better prepare them for any digital demands the future brings.

Students are not only able to collaborate with their fellow classmates, removing the singularity of learning, but also with students on the other side of the globe. More importantly, technology-based education gives a voice to the voiceless—from shy students to students with learning disabilities, devices enable these students to connect in ways that aren’t possible previously.

Benefits of Chromebooks in the Classroom

Chromebooks continue to be a popular choice given their low-price tag and ease of use. How do they compare to the competition, and why choose a Chromebook over another device? Here’s a look at six benefits that Chromebooks bring to the classroom.

How about a computer that boots in under ten seconds? With a Chromebook, you’re hard pressed to find a device that is easier to use. From long battery life to integrated virus protection, the only interruption students and teachers experience will be the bell ringing with these devices.

If your school doesn’t have the budget for one device to every student, Chromebooks are a great shareable device. Chromebooks require a Google account for every user and are cloud-based devices. When sharing, all students need to do is sign into their account for a personal learning experience.

With some school-friendly Chromebooks starting at $99, there’s no denying their value. Since Chromebooks are very lean laptops (few components and parts), they are generally have very low cost of ownership.

As just mentioned, Chromebooks have few moving parts—few components—which means they are easier to maintain than other devices. Beyond hardware, Google delivers all auto updates until the model reaches its AUE. With built-in virus and malware protection, you have peace of mind knowing your computer is protected.

A huge draw for Chromebooks is that they don’t draw battery life quickly. Some models can last 13 hours (almost two school days!) on a single charge.