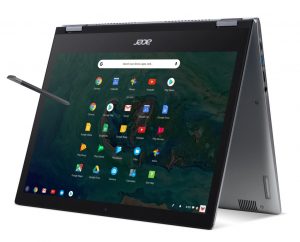 We were given a tentative release date of September and it looks like the Chromebook giant is going to be spot on for that launch window.  Announced August 2nd, Acer’s latest flagship offerings will first be made available through enterprise channels as the 8th gen Intel Chromebooks are being heavily marketed to the business sector. I don’t suspect the retail models to be far behind but we’ll get to that in a minute.

The 4-in-1, stylus-toting, 13.5″ Acer will come with three initial configurations. This is no surprise based on what we saw at the next@Acer event but what is a pleasant surprise is the pricing.

Here’s where I get a little confused about Acer’s pricing structure. The two models on offer in the traditional laptop for are as follows:

For the most part, the specs are very similar to the Spin models but your storage gets cut in half. Oh yeah, you lose the touchscreen, stylus and I’m pretty sure the backlit keyboard. But the price only goes down $100.

The information for this post was taken from an article by Gabriel Brangers from Chrome UNBOXED, follow this link for the complete details.

Here is a link to our original post on the Acer Chromebook 13 and 13 Spin for more specs.